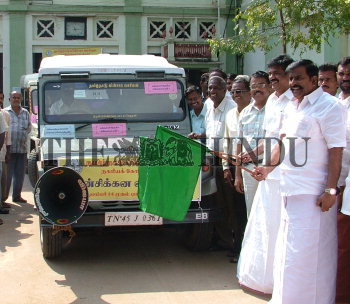 Caption : TIRUCHI: State Ministers K.N. Nehru and N. Selvaraj flagging off a 'mobile campaign' launched as a part of the 'Energy Conservation Week' observed by the Tamil Nadu Electricity Board at Tiruchi on December 14, 2006. Photo: R.M. Rajarathinam