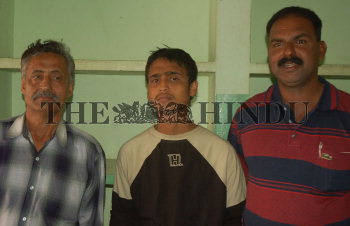 Caption : TUTICORIN, 23/01/2009: The missing boy V. Gourav Viswakarma (centre) who has been found, with his FATHER in Tuticorin on January 23, 2009. V. Gourav Viswakarma (15), who was missing since December 2008, from his home town of Darjeeling district of West Bengal was found at Green Gate of Tuticorin Harbour on January 14. His FATHER T.R. Viswakarma, a special grade driver, Indian Army, had lodged a complaint with Matigada police station. Photo: N. Rajesh