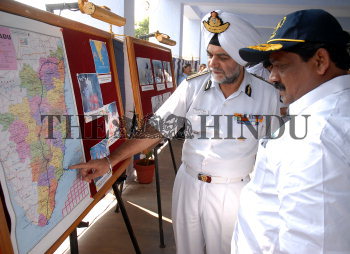 Caption : CHENNAI 22/1/2009 Tamil Nadu Fisheries Minister K.P.P. Sami looking at the route map of the MOTORBIKE Expedition 2009. Inspector-General SPS Basra , Commander, Coast Guard Region (East), (left), is in the picture. An eight-member team of the Coast Guard Region (East) set out on a 12-day MOTORBIKE expedition from Chennai to Kanyakumari to create awareness among the fishing community to maintain vigil at sea to protect the coastline from intrusion of anti-social elements. Photo: S. Thanthoni