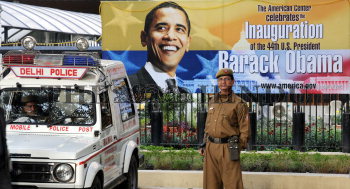 Caption : NEW DELHI: 20/01/2009: Scene outside the American Center in New Delhi, as US President elect Barack Obama takes charge as its 44th President at a lavish ceremony in Washington. Photo: V.V.Krishnan