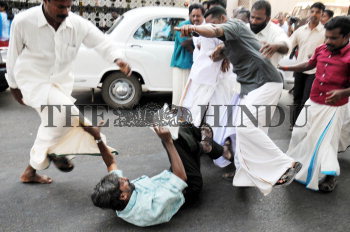 Caption : THIRUVANANTHAPURAM, 20/01/2009: Congress workers participating in a blockade of the Secretariat in Thiruvananthapuram on January 20, 2009 against the Left Democratic Front government's "anti-people" policies MANHANDLE a person who crosses their path on his way to his job in the nearby Accountant General's office. Several other aggressinve incidents happened during the blockade.. Photo: C.Ratheesh kumar