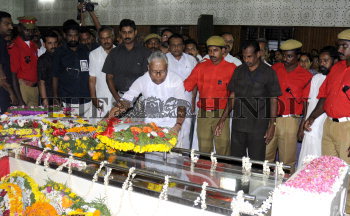 Caption : KOCHI, 19/01/2009: Kerala Chief Minister V.S. Achuthanandan laying wreath on the body of E. Balanandan, national president of the Centre of Indian Trade Unions (CITU) and a member of the Communist Party of India (Marxist)'s Polit Bureau, who died in Kochi on January 19, 2009. Photo: Vipin Chandran