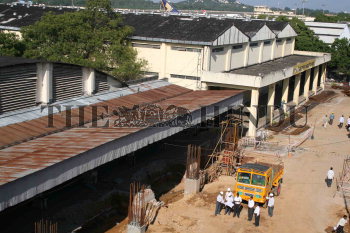 Caption : CHENNAI, 19/01/2009: A view of the Old Cargo building (Hindu hanger) at Chennai Airport. In September 1963, The Hindu flew its own planes to distribute its copies in the southern region. The Meenambakkam airport was a witness to this unique event in the history of world journalism on September 29, 1963. The Hindu was the first newspaper to resort extensively to air transport. The Old Cargo building stands testimony to this relationship between The Hindu and Chennai Airport. Photo: A. Muralitharan 19-01-2009