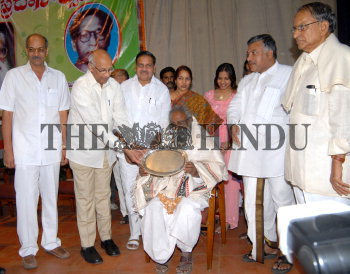 Caption : VISAKHAPATNAM, 18/01/2009: Telugu writer Ravuri Bharadwaj being presented with the Lok Nayak Foundation Award by High Court Judge G. Raghu Ram and Minister for Animal Husbandry Mandali Buddha Prasad at a function organised by the Lok Nayak Foundation in Visakhapatnam on January 18, 2009. Former MP s MVVS Murthy and Yarlagadda Lakshmi Prasad are also seen. This is the fifth award being given by the foundation. Photo: C.V. Subrahmanyam