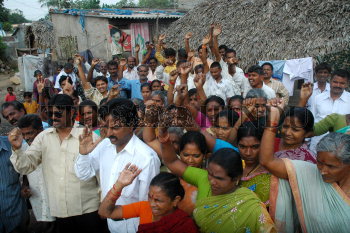 Caption : VIJAYAWADA, 18/01/2009: CPI leader P. Gowtham Reddy and dwellers of hutments protest against the move by the Railways to demolish their huts, at Bhanunagar near Madhuranagar railway station in Vijayawada on January 18, 2009. Photo: V. Raju