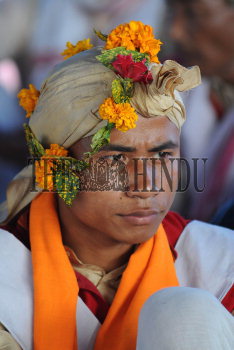 Caption : MORIGAON, 17/01/2009: Deep Singh Deu Raja - the teenaged Tiwa king who carries the legacy of the Gobha kingdom attends the traditional JonBeel festival in Morigaon district of Assam on January 17, 2009. Assam Government has announced an annual pension scheme of rupees nine thousand for the maintenance of the Tiwa kings living in Morigaon district of Assam. The Tiwas is one of the major tribe of Assam inhabiting areas in Assam and Meghalaya. Photo: Ritu Raj Konwar