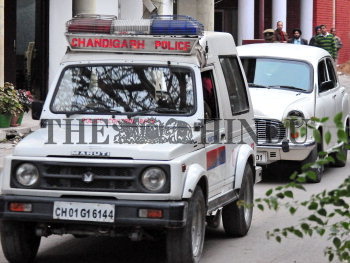 A POLICE GYPSY ESCORTS THE GERMAN LADY WHO APPEARE

Caption : CHANDIGARH, 16/01/2009: A police gypsy escorts the German lady who appeared in the local court in a physical abuse case outside the district court under heavy security cover in Chandigarh on January 16, 2009. The 20-year-old woman was allegedly gang-raped by five young men after being taken on a drive from an upmarket hotel in Chandigarh on September 27, 2008. Photo: Akhilesh Kumar