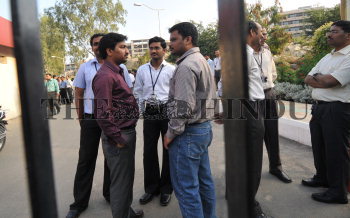 Caption : HYDERABAD, 08/01/2009: Satyam employees at Satyam Infocity facility in Hyderabad on January 08, 2009. A special team formed by Securities and Exchange Board of India (SEBI) to probe the Satyam scam reached Hyderabad following yesterday's confession by the IT major's Chairman B Ramalinga Raju of gross manipulations in the company's balance sheets in the past several years which resulted in Rs. 7,106 crore FRAUD. Photo: H. Satish