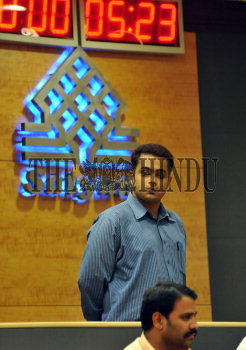 Caption : HYDERABAD, 08/01/2009: A Satyam employee in a pensive mood at Satyam Infocity facility in Hyderabad on January 08, 2009, as special team formed by Securities and Exchange Board of India (SEBI) to probe the Satyam scam reached Hyderabad following yesterday's confession by the IT major's Chairman B Ramalinga Raju of gross manipulations in the company's balance sheets in the past several years which resulted in Rs. 7,106 crore fraud. Photo: Mohammed Yousuf