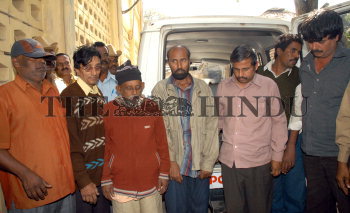 Caption : BANGALORE, 08/01/2009: A gang of seven members who were arrested by Sampigehalli police being brought to the Commissioner's Office, in Bangalore on January 08, 2009. Nearly 300 blank documents with fake seals and forged signatures of senior officers of various departments and fake documents related to loans and services of South Indian Bank had been recovered. Photo: K. Gopinathan