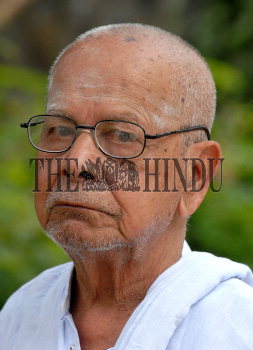 Caption : CHENNAI, 07/01/2009: Chellam Iyer, Secretary of Sadguru Sri Tyagabrahma Aradhana Kainkarya Trust during an interaction in Chennai on January 07, 2009. For over two decades now, the Sadguru Sri Tyagabrahma Aradhana Kainkarya Trust, which Chellam Iyer formed with a few devotees of the Thillaisthanam parampara, has preserved the tradition of conducting puja at the samadi of the saint poet. For Chellam Iyer, the aradhana is a mission that occupies his thoughts all the time and he leaves no stone unturned to make it happen every year. Infirmity does not stop him from visiting people, including philanthropists, distributing pamphlets and spreading the message. Photo: R. Shivaji Rao