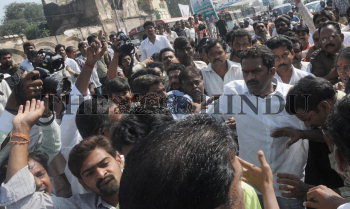 Caption : VIJAYAWADA, 26/12/2008: A follower of Vijayawada East MLA Vangaveeti Radhakrishna tries to slap Congress leader Malladi Vishnu during an argument between Vishnu and Radhakrishna, at the garlanding of statue of Vangaveeti Ranga on Mahatma Gandhi Road in Vijayawada on December 26, 2008. Photo: Ch. Vijaya Bhaskar