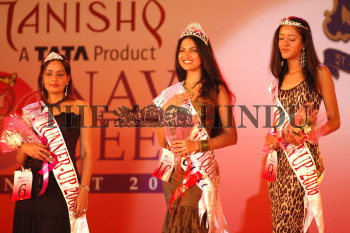 Caption : Kochi: Navy Queen 2006, Parvathy Omanakuttan (centre); the first runner up Rhea Sajan (right) and the second runner up Dipitha Shayam at the Southern Naval Command, Kochi on the night of December 9,2006 at the Navy Ball. Photo:Vipin Chandran