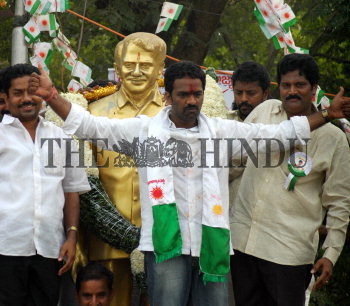 Caption : VIJAYAWADA, 23/12/2008: MLA Vangaveeti Radhakrishna, who joined the Praja Rajyam Party, gestures after garlanding the statue of his father Vangaveeti Ranga at Raghavaiah Park, upon his arrival in Vijayawada on December 23, 2008. Photo: V. Raju