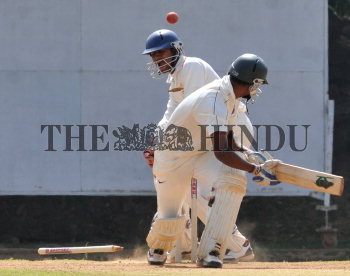 Caption : BANGALORE, 19/12/2008: Enamul Haque of Maharashtra is bowled by K.P. Appanna (not in pic) as wicketkeeper Tilak Naidu looks on during the Ranji Trophy Super League Group cricket match against Karnataka at the RSI grounds in Bangalore on December 19, 2008. Photo: K. Bhagya Prakash