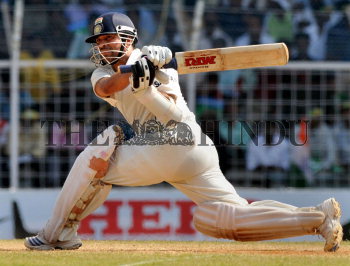 Caption : CHENNAI:15/12/2008: Indian batsman Sachin Tendulkar Plays a shot during the fifth day of the first test match of the England-India cricket Test series for the RBS Cup at M.A.Chidambaram Stadium in Chennai on December 15, 2008. Photo:K.R. Deepak