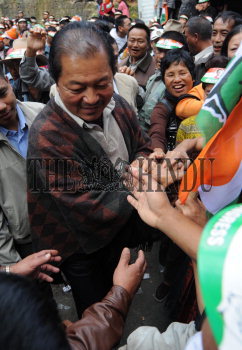 Caption : MIZORAM„08-12-2008 : (CONGRESS WON IN MIZORAM ELECTION) Congress Chief Ministerial candidate and the former four times Chief Minister Lalthan Hawla being congratulated by the Congress supporters after wining the Assembly election in Aizawl, capital of Mizoram on Monday, December 08, 2008. Lal Thanhawala won his both the seats from Serchip and South Tuipai constituencies. Congress won the forty member assembly election by the absolute majority and will form the next government. PHOTO: RITU_RAJ_KONWAR