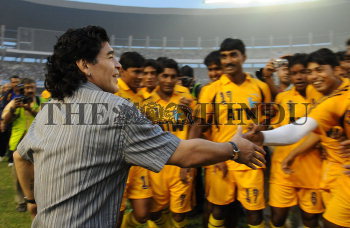 Caption : KOLKATA, 06/12/2008: Diego Maradona, the ace Argentine footballer and coach of Argentina's football team, shakes hands with Indian footballers at the Salt Lake Stadium in Kolkata on December 06, 2008 . He is in the city to lay the foundation stone of Indian Football School. Photo: Arunangsu Roy Chowdhury