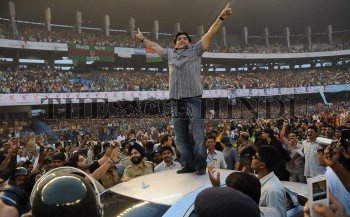 Caption : KOLKATA, 06/12/2008: Diego Maradona, the ace Argentine footballer and coach of Argentina's football team, acknowledges the cheers of thousands of fans at the Salt Lake Stadium in Kolkata on December 06, 2008. He is in the city to lay the foundation stone of Indian Football School. Photo: Arunangsu Roy Chowdhury