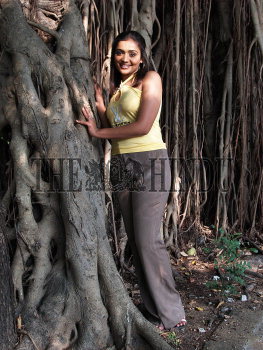 Caption : CHENNAI: Television actress MEERA VASUDEVAN in Chennai on December 07, 2006. Discovery Travel and Living chose a few places that it thought exemplified life in each of six Indian metros - Kolkata, Hyderabad, Delhi, Mumbai, Banglaore and Chennai to feature in six part series "Indian Rendezvous". A well-known and well-admired face will anchor each of the half-an-hour capsules. MEERA VASUDEVAN to anchor for Chennai episode. Photo: S. Thanthoni