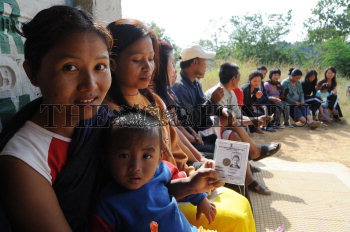 Caption : AIZAWL 02-12-2008 : (MIZORAM ASSEMBLY ELECTION VOTING) Mizo men and women waiting in queue to cast their votes in Aizawl South 3 constituency in the outskirts of Aizawl city capital of Mizoram state on December 02, 2008. Voting for the 40 member Mizoram Assembly held peacefully in Mizoram where 6, 11,124 voters will decide the fate of 205 candidates, which include nine women and 36 independents. The 722-km international border along the Bangladesh and Myanmar has been sealed as also the borders with Manipur, Assam and Tripura states in view of the election. Most of the polling booths in border areas are classified as hyper-sensitive and additional state police personnel were deployed along the borders. This is the forth Assembly polls since Mizoram attained statehood in February 1987, a year after the Mizo Peace Accord was signed. The three main contenders are the ruling Mizo National Front (MNF), the Congress and the United Democratic Alliance (UDA). PHOTO: RITU_RAJ_KONWAR