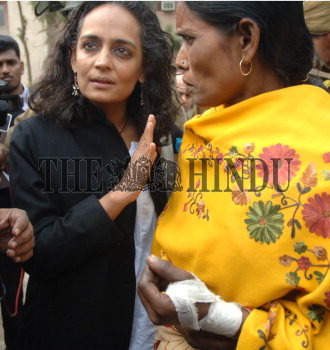 Caption : Renowned writer and social activist Arundhati Roy (left) speaks to one of the victims of police action in Singur during a protest by activists of the National Alliance of People's Movement and various other organisations outside CPI (M) headquaters in New Delhi on December 7, 2006 against the West Bengal Government's decision to hand over farmland in Singur, West Bengal, to Tata Motors to build a plant where production is due to begin next year. Photo: V. Sudershan