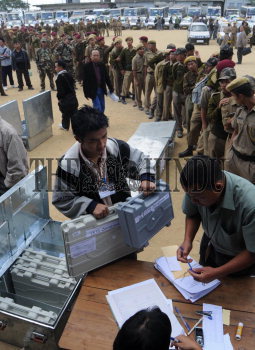 Caption : AIZAWL 01-12-2008 : (MIZORAM ASSEMBLY ELECTION PREPARATION) Electronic Voting Machines (EVM) being distributed in Aizawl city capital of Mizoram state on the eve of the Assembly election on December 01, 2008. Voting for the 40 member Mizoram Assembly will be held on December 2nd 2008 where 6, 11,124 people will cast their vote. The 722-km international border along the Bangladesh and Myanmar has been sealed as also the borders with Manipur, Assam and Tripura states. Most of the polling booths in border areas are classified as hyper-sensitive and additional state police personnel were deployed along the borders. PHOTO: RITU_RAJ_KONWAR