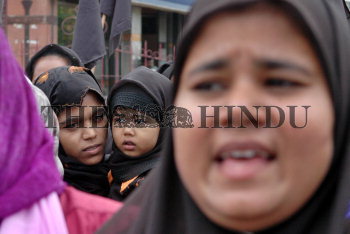 Caption : Members of the minority community in a demonstration organised in Coimbatore on December 6, 2006 by the Tamil Nadu Muslim Munnetra Kazhagam on Huzur Road demanding the reconstruction of the Babri Masjid at Ayodhya, marking the 14th anniversary of the demolition. Photo: S. Siva Saravanan