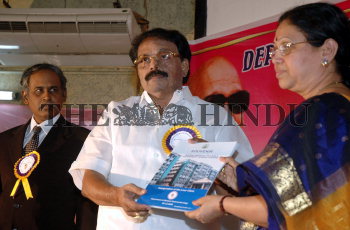 Caption : K.K.S.S.R. Ramachandran, Minister of Health and Family Welfare releasing the souvenir and the same being received by Madras Medical College Dean Dr. Kalavathy Ponniraivan at the the inaguration of the Liver Clinic at the Government General Hospital in Chennai 0 on December 6, 2006 while Dr. S. Barnaba Durairaj (ex left), HOD, Department of Medical Gastroenterology looks on. Photo: K_Pichumani