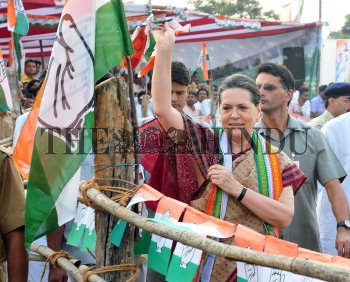 Caption : RAIGARH (CHHATTISGARH), 18/11/2008 Congress President Sonia Gandhi waves to the people during an election meeting in favour of party candidates on the last day of campaign for second phase of Chhattisgarh assembly elections at Kharsiya town in Raigarh district of Chhattisgarh on Tuesday, November 18 2008. Photo: Akhilesh_Kumar