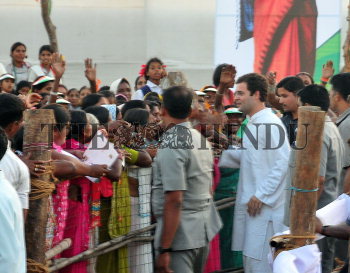 RAHUL GANDHI MEETING WITH PARTY SUPPORTERS AFTER A

Caption : RAIPUR, 18/11/2008: Congress (I) general secretary Rahul Gandhi meeting the supporters after an election meeting in favour of party candidates, while campaigning for Chhattisgarh Assembly polls, in Raipur on November 17, 2008. Photo: Akhilesh Kumar