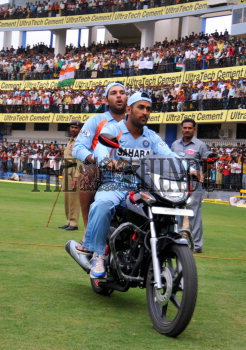 Caption : INDORE: 17/11/2008: Indian skipper M.S. Dhoni driving the bike awarded to Man of the Match Yuvraj Singh (sitting on the pillion) after winning the second one day international cricket match against England at the Maharani Usha Raje Stadium in Indore on November 17, 2008. Photo: K.R. Deepak