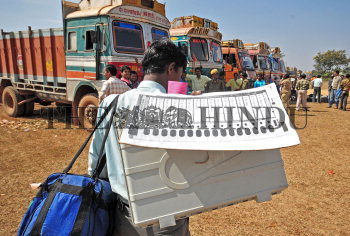 Caption : BASTAR (CHHATTISGARH), 13/11/2008 An election staff carrying Electronic Voting Machine leaves to polling station at Jagdalpur in Bastar district of Chhattisgarh on the eve of polling on Thursday, November 13 2008. 39 assembly constituencies including southern part of state is going to poll on Friday. Photo: Akhilesh_Kumar