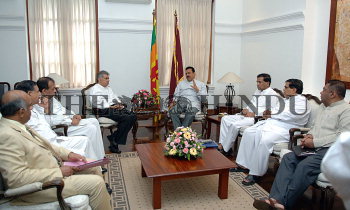 Caption : President Mahinda Rajapakse and Opposition UNP Leader Ranil Wickremesinghe during a meeting at the Temple Trees to discuss the signed MoU between the SLFP and the UNP in Sri Lanka on December 05, 2006. Photo: Sriyantha Walpola