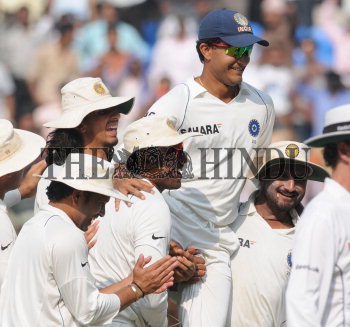 Caption : NAGPUR, 10/11/2008: Indian players carry Sourav Ganguly on their shoulders while giving him a send off after winning the fourth and final cricket Test against Australia in the Border-Gavaskar Trophy Test series at the VCA Stadium in Nagpur on November 10, 2008. India beat Australia by 172 runs in the fourth Test and won the series by 2-0. Photo: S. Subramanium