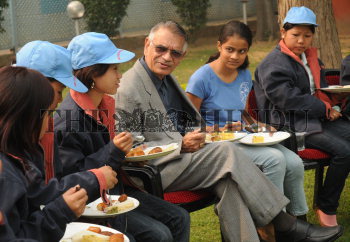 Caption : NEW DELHI: 08/11/2008: Union Home Minister Shivraj Patil and his grand-daughter Rudrali (second from right) with girls from a remote border area of Arunachal Pradesh at his residence during an interaction under a programme of civic action and border area development of Indo-Tibetan Border Police after an excursion for exposure to the rich history and heritage of India, in New Delhi, on November 08, 2008. Photo: V.V.Krishnan