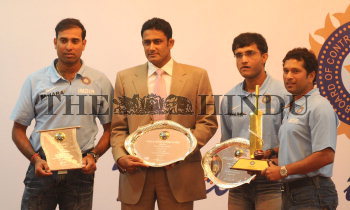 FELICITATION OF ANIL KUMBLE AT NAGPUR

Caption : NAGPUR, 06/11/2008: India's former captain Anil Kumble (second from left) along with V.V.S. Laxman, Sourav Ganguly and Sachin Tendulkar seen during a felicitation function by BCCI for their contribution to Indian cricket at the VCA Stadium in Nagpur on November 06, 2008. Photo: S. Subramanium