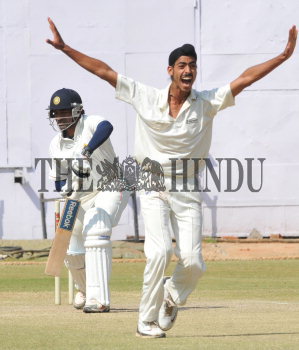 Caption : BANGALORE, 06/11/2008: Anurit Singh of Railway Sports Promotion Board celebrates after taking the wicket of Robin Uthappa during the Ranji Trophy Group B super league cricket match between Karnataka and Railways Sports Pramotion Board at Chinnaswamy stadium in Bangalore on November 06, 2008. Photo: K. Bhagya Prakash