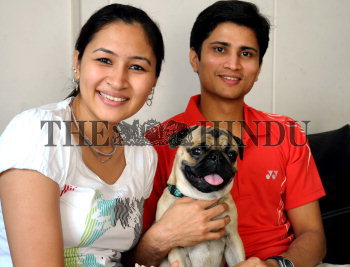 Caption : HYDERABAD 06/11/2008:.National Badminton Champion, Chetan Anand, considered one of the best badminton player produced by country, currently World No 15 rank player taking time out with his Jwala Gutta, National badminton Doubles champion for the past six years, for special photo shoot for ĪThe Hinduā in Hyderabad on November 06, 2008 after returning from European circuit. The Arjuna awardee 28 year old Chetan Anand born in Vijayawada, started badminton career in 1992 at the Mini Nationals in Mumbai and reaches at peak in creating history by becoming the first Indian Menās shuttler to win a Grand prix in Germany 2008 . Photo: Mohammed Yousuf