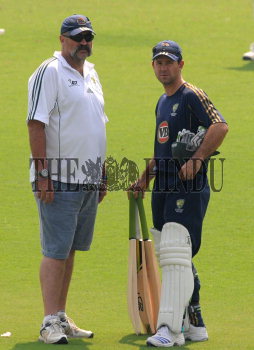 Caption : NAGPUR, 04/11/2008: Australian captain Ricky Ponting seen with Selector Merv Hughes during the team's practice session at the VCA cricket stadium in Nagpur on November 4, 2008. The fourth and final Test match of the Border - Gavaskar Trophy 2008 will start from November 6, in the central Indian city with India leading the series 1-0. Photo: S. Subramanium