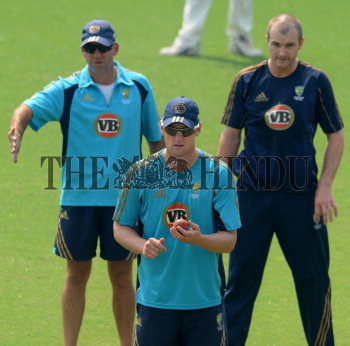 Caption : NAGPUR, 04/11/2008: Australia's Cameron White prepares to bowl at the net watched by Coach Tim Nielsen and teammate Jason Krejza (right) during a practice session at the VCA cricket stadium in Nagpur on November 4, 2008. The fourth and final Test match of the Border - Gavaskar Trophy 2008 will start from November 6, in the central Indian city with India leading the series 1- 0. Photo: S. Subramanium