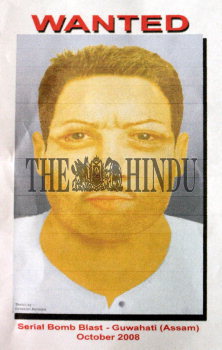 Caption : GUWAHATI 04-11-2008: (SKETCH OF ONE SUSPECT RELEASED IN GUWAHATI) Sketch of one the suspects being released by the Assam Police in Guwahati on Tuesday, November 04, 2008. The death toll of the serial blast in Assam rose to 85. According to the official report a total of 826 people were injured in the serial blasts. The Islamic Security Force (Indian Mujahidin) claimed the responsibility of the serial blast through an SMS sent to a local satellite TV channel. In the SMS the Islamic outfit also mentioned that it would continue such activities in the near future. Police claimed that the ISF-IM outfit was formed in 2000 in Assam. PHOTO: RITU_RAJ_KONWAR