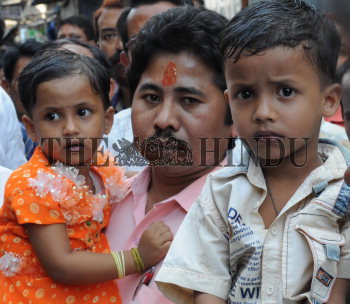 Caption : GUWAHATI 03-11-2008: (MORE INJORED BLAST VICTIMS DIED IN THE SERIAL BLASTS IN GUWAHATI) Debasish (in right) and Moyuri, who lost their father today (November 03) in Guwahati on Monday, November 03, 2008. Their father Dipak Deka who was seriously injured in October 31 bomb blast died today in Guwahati. With the death of two more victims the death toll of the serial blast in Assam rose to 84. According to the official report a total of 820 people were injured in the serial blasts. PHOTO: RITU_RAJ_KONWAR