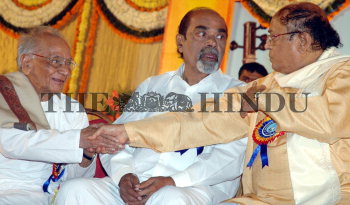 Caption : HYDERABAD: Jnanpith awardee, C.Narayana Reddy, who penned maximum number of 320 songs sung by legendary singer, Ghantasala greets harmonium player, P. Sangeeta Rao who was associated with the singer for four decades at a function organised by the department of culture in Hyderabad on December 04, 2006 to commemorate the 84th birth anniversary of the late singer. D. Ramanaidu also seen. Photo: K. Ramesh Babu