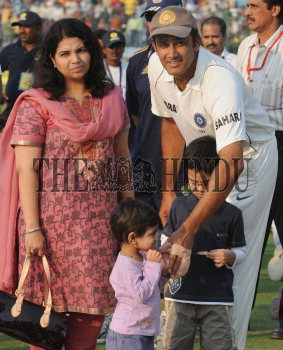 Caption : Border Gavaskar Trophy 3rd test, New Delhi, 02/11/2008: Indian Captain, Anil Kumble with his wife and children after he decided to retire from International Cricket on the 5th day of the third Test match between Australia and India at Ferozshah Kotla Grounds in New Delhi on November 2, 2008. Photo:S_Subramanium