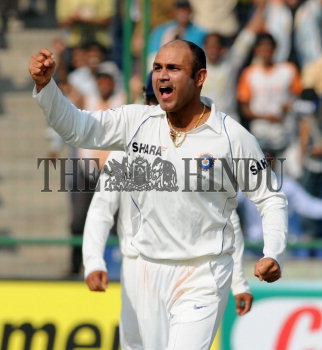 Caption : NEW DELHI, 01/11/2008: Indian bowler Virender Sehwag celebrates on getting the wicket of Australian batsman Cameron White (not in pic) on the fourth day of the third cricket Test match in the Border-Gavaskar Trophy Test series at the Ferozeshah Kotla ground in New Delhi on November 01, 2008. Photo: S. Subramanium