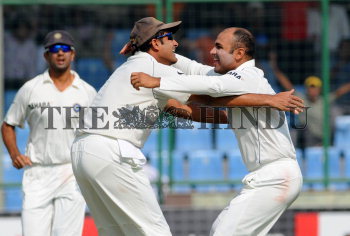 Caption : NEW DELHI, 01/11/2008: India's Virender Sehwag (right) celebrates with captain Anil Kumble after getting the wicket of Australian batsman Shane Watson (not in pic) as Rahul Dravid rushes to join them on the fourth day of the third cricket Test match in the Border-Gavaskar Trophy Test series at the Ferozeshah Kotla ground in New Delhi on November 01, 2008. Photo: S. Subramanium