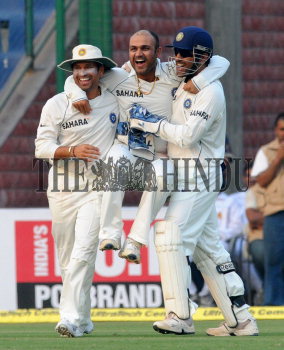 Caption : NEW DELHI, 31/10/2008: India's Virender Sehwag celebrates with Sachin Tendulkar and wicketkeeper M.S. Dhoni after getting the wicket of Australian batsman Michael Hussey on the third day of the third cricket Test match of the Border-Gavaskar Trophy Test series at the Ferozeshah Kotla ground in New Delhi on October 31, 2008. Photo: S. Subramanium