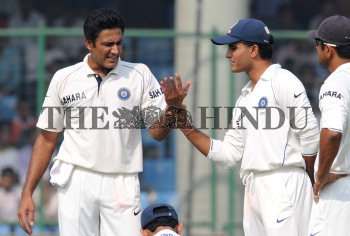 Caption : NEW DELHI, 31/10/2008: India's Sourav Ganguly (centre) having a look at Anil Kumble's bleeding hand after the latter got injured while trying to take Australian batsman Matthew Hayden's catch on the third day of the third cricket Test match of the Border-Gavaskar Trophy Test series at the Ferozeshah Kotla ground in New Delhi on October 31, 2008. Photo: S. Subramanium