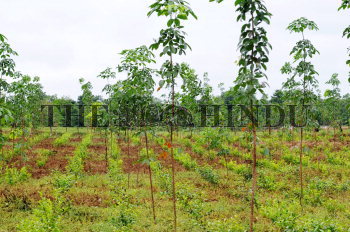 Caption : TRIPURA„30-10-2008 : (RUBBER CULTIVATON IN TRIPUR) Scene of a tea garden which is now be replaced by rubber plantation in Tripura state on October 30, 2008. Though Tripura is traditionally known as a tea growing state, due to more profit many tea gardens have now started replaced by rubber plantation in Tripura. Tripura is situated along the Indo-Bangladesh international border is the second largest rubber producer in India after Kerala. Tripura Rubber Mission and Forest Department with the objectives to bring a total of 85, 093 hectors of land under rubber cultivation in the state in the next 20 years. Natural Rubber based activities has already been declared as ŃThurst Sectorõ because of its special significance for the Tripura state. The state government has also set up one Rubber Park with technical support of Rubber Board. India ranked third in terms of production of natural rubber in the world after Thailand. It is expected that the rubber production, which is presently about 5, 000 MT per annum in Tripura state, will increase to about 20, 000MT. PHOTO: RITU_RAJ_KONWAR